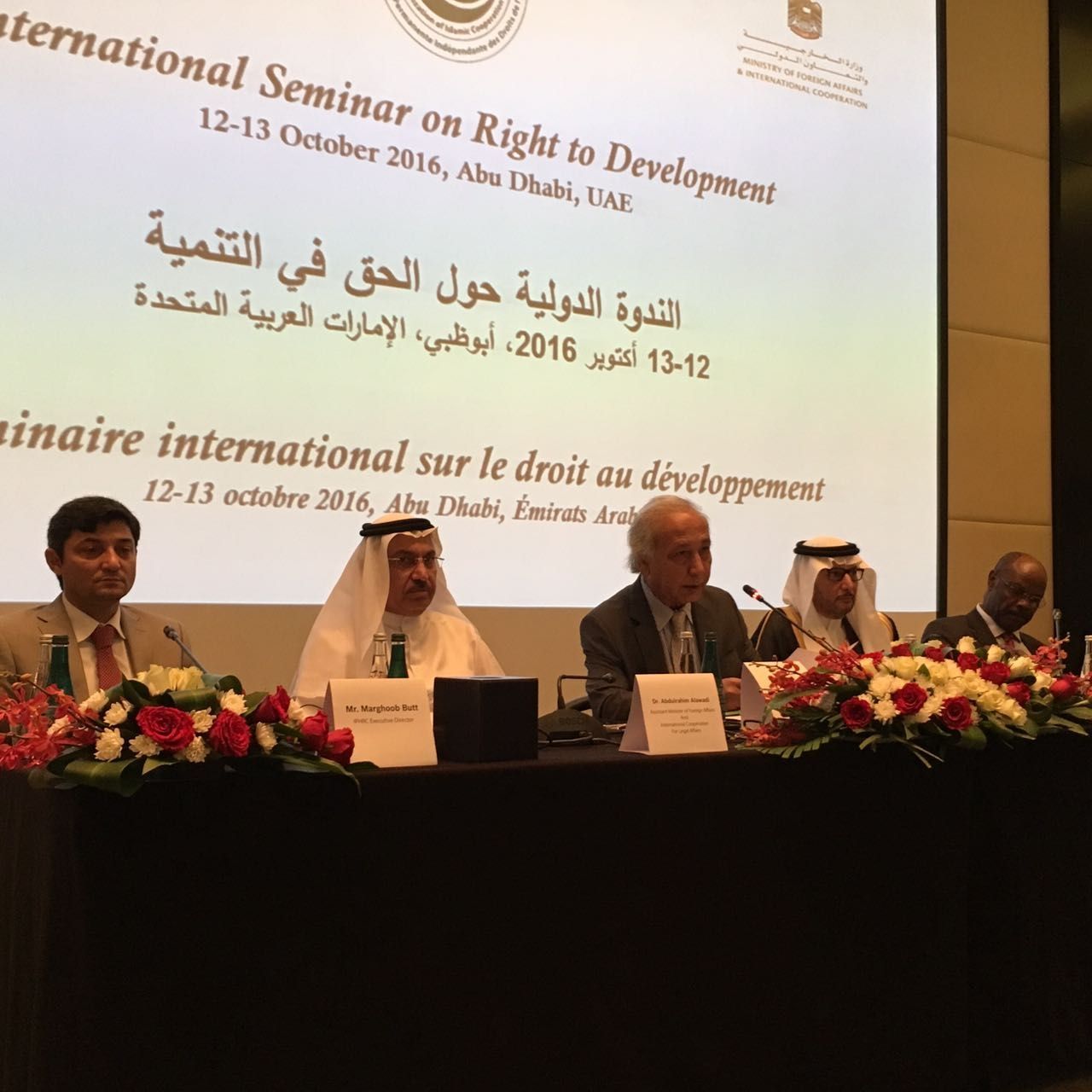 The OIC’s Independent Permanent Human Rights Commission (IPHRC) held its 3rd Annual Seminar on the topic of “Right to Development” (RtD) in collaboration with the Government of United Arab Emirates (UAE) and UN Office of the High Commissioner for Human Rights (OHCHR) to commemorate the 30th anniversary of the ‘UN Declaration on Right to Development’ (DRtD) in Abu Dhabi on 12-13 October 2016.

The two day event was attended by members of the IPHRC along with experts from multilateral and intergovernmental organizations and representatives of OIC Member and Observer States including their National Human Rights Institutions.

Dr. Abdul Rahim Al Awadi, welcomed partnership with the IPHRC in organizing this important seminar and expressed willingness to strengthen it further. In his remarks, he illustrated the efforts and commitment of the UAE government to implement the DRtD by adopting comprehensive development policies including empowerment of women and investment in human resource development of its people without any distinction. He also conveyed details of the UAE’s generous international assistance, which is directed mostly towards development initiatives.

The OIC Secretary General in his message recalled that the OIC Member States are obligated by the OIC Charter to work for the promotion of human rights and fundamental freedoms, good governance, rule of law and accountability in their respective countries. He assured that OIC will continue to reach out to all OIC Member States, specialized institutions, media and civil society to implement right to development based on (i) distributive social justice (ii) participation and transparency and (iii) international cooperation on transnational issues to build inclusive, peaceful and resilient societies taking into account cultural, social and political particularities.

The IPHRC Chairperson, in his remarks, emphasised that RtD remains one of the priority areas of work for IPHRC which shall continue to collaborate with all the stakeholders to promote human rights-based approach in all development processes ensuring participation, accountability, non-discrimination, equality and equity and consistency with international human rights standards.

Experts and panelists in their presentations on the evolving concept of the RtD described it as an indivisible and interdependent, interrelated and mutually inclusive individual and collective right. They reminded States of their obligations at three levels for effective implementation of RtD: (a) internally, through the formulation of national development policies and programs affecting persons within their jurisdictions; (b) internationally, through the adoption and implementation of policies extending beyond their jurisdictions; and (c) collectively, through global and regional partnerships.

While acknowledging the adoption of DRtD as a milestone achievement, the Commission expressed concern that, despite passage of three decades and umpteen reaffirmations of this right in international instruments, the goals of the DRtD have not been achieved. Furthermore, the Commission supported the call made by most developing countries to transform the Declaration into a binding International Convention on the Right to Development.

The Commission welcomed creation of the mandate of UN Special Rapporteur on the RtD and urged the mandate holder to work for system wide mainstreaming of the RtD and its fulfilment in the context of 2030 SDGs especially implementation of common but differentiated responsibilities reaffirmed in section 12 of the SDGs.

The Commission stressed the need to scale up international cooperation against corruption, which continues to plague countries across all geographical regions and seriously undermines as well as adversely affects people’s human rights including the RtD. The importance of good governance, active, meaningful and fair participation for developing RtD policies was also emphasized.

The International community was urged to take firm steps to overcome the political hurdles involved in the full and effective realization of the RtD in line with the UN Charter provisions of international cooperation for meaningful promotion of socio-economic progress for all.

A detailed outcome document IPHRC “Abu Dhabi Declaration on the Right to Development” was unanimously adopted which is available at the website: www.oic-iphrc.org.

The Commission, while acknowledging the important role of the the OHCHR in promotion and realization of the RtD, thanked them for their participation and substantive contributions towards discussion during the Seminar.

The Commission also expressed its profound gratitude to the Government of UAE for their warm hospitality and support for hosting the Seminar.